We're making progress on visiting the city parks of Royal Palm Beach. Lindsay Ewing Park is really just a ball field. (It's pretty close to a couple of other parks if you want a playground.) However, there was one picnic table, so we took our lunch, which we enjoyed after spending a few minutes walking the perimeter of the park. 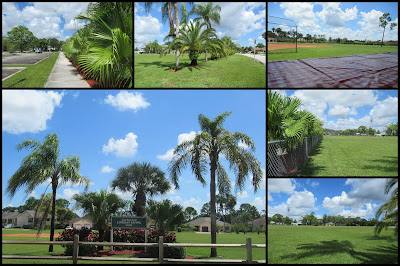 Wayne remembered to bring along his butterfly net, and even had success in finding and actually catching a butterfly - his very first one! That made this rather ordinary local picnic quite memorable. 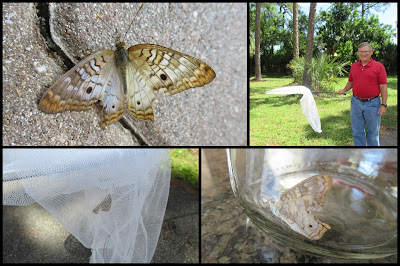 At home he consulted his butterfly book and identified it as a White Peacock Butterfly or Anartia jatrophae. Here's what else we learned:

Identification: Upperside is white with light brown markings and a double row of light crescents at the margins. Forewing has one round, black spot; hindwing has two. Dry season (winter) form is larger and paler; wet season (summer form) is smaller and darker.

Life History: Males patrol and occasionally perch to find females. Eggs are laid singly near the host plant or under its leaves.

Flight: Throughout the year in South Texas and the Deep South.

Range: Resident from Argentina north through Central America, Mexico, and the West Indies to South Texas and southern Florida. Migrates and temporarily colonizes to central Texas and coastal South Carolina. A rare wanderer to North Carolina, Missouri, Nebraska, and Kansas. 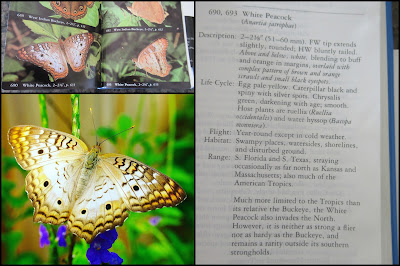