The Tale of our Second Ten Anniversaries

Happy 38th Anniversary to Us! 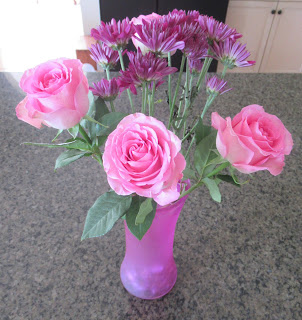 That means it's time for another story. Last year I documented how we celebrated (or didn't celebrate) our first ten anniversaries. Have fun learning about the second ten! It's evident from the lack of any "couple" pictures that this decade was filled with raising a family. That's okay; now we're reaping the rewards of that time-consuming labor of love, and thoroughly enjoying time for just the two of us. 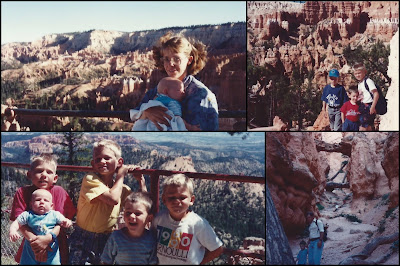 Anniversary #11 – We spent this Friday driving home from a family vacation to Bryce Canyon National Park. That probably means we spent the evening unloading; however, we might have added a candlelight dinner after the kids were in bed, or maybe we saved that for Saturday. Who knows? This is your reminder to keep your journal up-to-date. 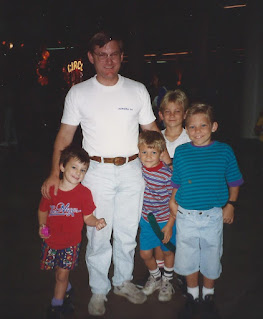 Anniversary #12 – Since it was a Saturday, we spent the whole day together, visiting several different stores to buy furniture for our new home. At eight months pregnant, this wasn't my favorite way to spend the day, but I wanted the task completed before Michelle arrived, so it was my choice. The living room, dining room, and bedroom furniture we bought that day is still in fantastic shape, just like our marriage! (No pictures of our shopping spree, but there's my handsome husband with the older boys on a different excursion that month.)

Anniversary #13 -  Wayne was in South America for a two week business trip. It wasn't the first anniversary we spent apart, and it wouldn't be the last, either.

Anniversary #14 - He was in town this year, though. However, because our anniversary was on a weeknight, we celebrated the Friday before with dinner at El Torito followed by a show (the female version of “Odd Couple”) at the Willows Theater in Concord. 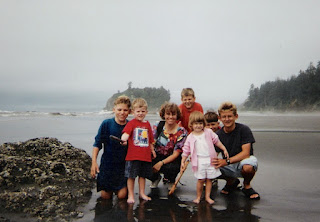 Anniversary #15 - On this Wednesday anniversary, Wayne surprised me by coming home from work early with flowers in hand. Unfortunately, his mid-afternoon arrival was met with the typical after-school chaos (folding laundry, fixing dinner, baking cookies, supervising kids’ chores, and assisting with homework). He retreated and took a nap. That Friday, we farmed out the kids and enjoyed the peace and quiet of a romantic candlelight dinner at home. (No picture of our anniversary date, but that summer for our family vacation we retraced our honeymoon drive up the Pacific coast, stopping to recreate our visit to the beach in Newport, Oregon. Great memories of both trips!)

Anniversary #16 - This was another anniversary buried by the cares of daily life, at least in my journal entries. The week of our anniversary we were adjusting to a new school year, the infamous "year of the crazy schedule," and starting soccer season, along with spending a lot of time and expense getting our vehicles to pass the required smog checks. I'm positive, however, that we made time for a special dinner sometime that week though.

Anniversary #17 - Since it was a Friday, we went out for dinner on our actual anniversary. Apparently, our budget wasn't quite up to an extravagant celebration; we ate hot dogs and brought a video home to watch. However, in honor of our special day, the movie was a heartwarming romance (Message in a Bottle) and not a rousing adventure or scary sci-fi. 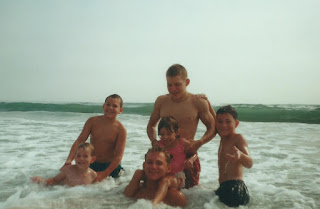 Anniversary #18 - August of 2000 saw us driving both of our cars across the country, moving the family from California to Florida. As usual, there's no picture of us, but I do have one of our children experiencing the warm Atlantic Ocean for the first time.

Anniversary #19 - My world traveller was in Brazil on our actual anniversary, so we went out for dinner the Friday before. 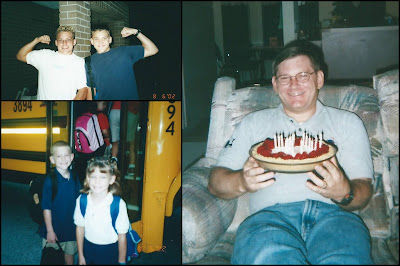 Anniversary #20 - This anniversary was on a school night, and as a seminary teacher I was planning on waiting until Friday to do our celebrating. However, my wonderful husband would have none of that. No delaying around for this milestone anniversary! He brought home roses and insisted we go out to dinner. We didn't stay out late, and even had a seminary student as our waiter at Rio Bravo. Of course, in this pre-digital era, I don't have any pictures of that night, but I do have pictures from the first day of school and the August birthday that year.

There you have it! Next year we'll move on to the third ten years, just in time to complete the fourth decade the year after. Happy Anniversary to us!! 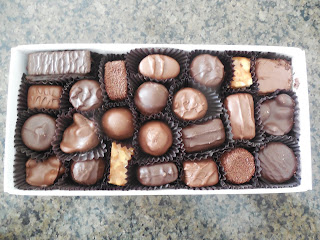